Laws of Traveling without the Legal Limits

WASSUP! WELCOME TO MY BLOG PAGE

Fall in Love with a Country to Love

France! We’ve been here a week and are having a blast.

On Day One, after we emerged from the Chunnel, we drove over to Giverny to see Monet’s house and gardens. We’ve been there before and it’s one of our favorite spots in France, even though now there are a million tourists that crawl over the land and stuff themselves into the house.

It’s great because the people who are there are Monet lovers or appreciators. So everyone just wants to soak up the Monetness of the whole area. People kind of walk around in awe and respect, like they can’t really believe they are standing at the source of all the fabulous paintings that Monet created.

It is pretty amazing. And to be able to see the pond that was the centerpiece of some of his famous paintings . . . it’s just very cool. Kind of surreal.

After Giverny we found a bed-and-breakfast. Since Wifey speaks French, it wasn’t too difficult.

Thank God she speaks French. It would be a lot more complicated if she didn’t. Especially because we prefer to knock around in the smaller towns and countryside, where a lot of the older people don’t speak a lot of English.

Yeah, there is usually a young person around who speaks English, but not always. The bed-and-breakfasts seem to often be run by people Wifey’s and my ages.

So the place we found was a stone cottage with a giant wild garden around the outside of it. Our room was quaint with a queen bed that was actually very comfortable. Not lumpy like you’d expect to find in a house made of rocks!

We went to a pub in town for dinner and had steak and kidney pie, washed down with a pint of Guinness. 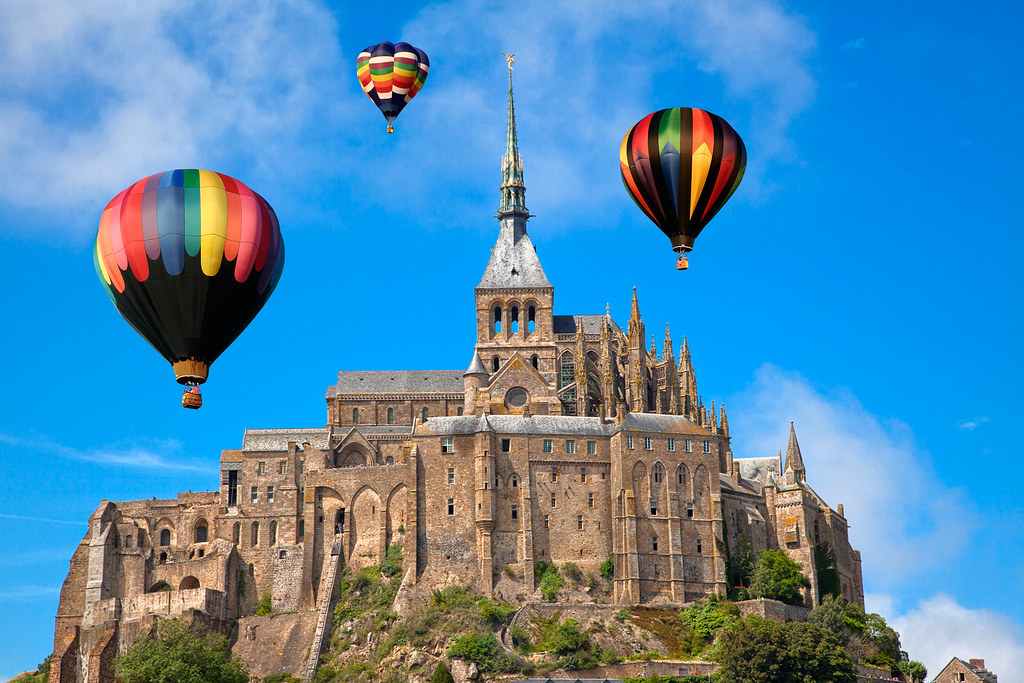 One place we’ve never been in previous trips is Mont. St. Michel. We’ve always wanted to get there and this time we did.

It was as spectacular as we imagined. The site of the island with the centuries-old church perched in the middle of it was breathtaking.

We saw a bunch of castles in France, too. There were several in the Loire valley.

Wifey was in her element. I enjoyed seeing her so happy. She had that guide book practically glued to her side and was whipping it out constantly to read some tidbit or another out loud about whatever place we were at.

She had such a contented look on her face. When we’d come up to a new site—a castle or a landmark or a town or a wall—she’d get this look of anticipation. Like a little girl about ready to unwrap a new doll. Eyes bright, a little smile playing around her lips. She was oblivious to how she looked.

Those moments when I’d sneak a look at her and see the joy in her eyes were touching and precious. Sometimes she’d catch me looking at her and she’d slap me lightly and laugh.

We had a lot of those moments and they made me so happy to be with her in those amazing locations.

It has been two weeks since I last wrote anything.  In that time we have traveled through Wales and England and even popped over to Ireland.

We really loved Wales. As I mentioned before Wifey is addicted to historical stuff and Wales has that kind of thing crammed into every valley and perched on every hilltop.
There’s more castles and fortifications in Wales than there are fleas on a wild dog. I thought Wifey was going to go into cardiac arrest in her excitement.

I have to say, though, that the castles are very interesting. I cannot imagine living in them, though, especially in that climate where it’s cold and damp for a lot of the year. I think those castles would have been cold all the time. So you’d have to keep bundled up. Imagine taking baths. Ugh! No thanks.

So while those castles are imposing and romantic and steeped in history and significance, I can’t say I’d ever want to live in one.

I loved the scenery in Wales. Truly spectacular. We took roads up into the craggy mountains. So wild! So cold! So barren! Sheer rock faces and then other sides with slabs of rock all in a sharp and jagged tumble.

Incredibly inhospitable terrain. And yet we saw goats all over those rock faces, picking their way through as easy as pie. We often saw them running. Running! And they never fell. They must have velcro on the bottoms of their hoofs.

Wifey and I took a lot of pictures. We brought our Canon Rebel T51 on this trip, with our zoom lens and regular one and our macro. Wales was a great place to have all of those lenses.

I probably took a hundred pictures of those mountains and the goats. There were also small lakes in the depressions between the mountains. They were blue as sapphires when the sun came out and gray as slate when it went behind the clouds.

When we left Wales we drove across England to the east coast and then explored around that area for a few days. Enjoyed the little villages and the cottages with the wild gardens in the front, the open markets and the white churches with their steeples.

Loved driving through the countryside and seeing stone farmhouses with smoke wisping up out of the chimneys and dissipating into the sky. Loved the hillsides dotted with white sheep and crisscrossed with hedgerows and low stone walls.

We didn’t hit a lot of traffic, probably because it’s not high tourist season. We passed rattling farm trucks, the occasional lorry, and every once in a while a late model car like ours.

Also ran into horse-drawn carts sharing the road with us. That surprised us. Never imagined that carts would still be in use.

Then we were done with England. We drove through the Chunnel and began our adventure in France! And I’ll stop here for now.

I haven’t updated this blog in a few days. I’ll get you caught up.

It took another day or two to get the accident situation all sorted out with the attorneys talking with the legal network in Scotland (not sure if that is them).

Also we had to arrange for another car which wouldn’t have been a big deal if we hadn’t arranged for a certain kind of lease situation with the first car. But anyway we did get that all sorted out and we now have our second vehicle for the trip, a Citroen that has some pretty nice features.

Trip to Isle of Skye

So we headed out from Edinburgh and made our way over to the west coast. We wanted to take a ferry across and explore some of the islands off the west coast, especially the Isle of Skye and the Hebrides.

We have had a really fabulous time on those islands.

One day we were driving around Skye on some back roads. We had pulled over off a road that overlooked the coastline and we were just standing there enjoying the scene.

As we stood there, a farmer went by in an actual horse-drawn cart. He stopped and chatted with us for a bit and then to our great surprise invited us to his house for lunch.

He looked like he was part of the land. Canvas coveralls, tall leather boots, big hat, linen shirt. And then him driving the cart made him look like he had come out of the 19th century or something.

So it was actually pretty funny when he pulled out a cell phone which I could see was the latest iPhone and called home to his wife to let her know that we would be coming for lunch. That was not what I expected.

So then we followed him as he was in his cart. We crept along behind in our car and went over a few hills and came across to his house.

It was a small and simple house but very tastefully furnished and decorated. His Mrs. had made up some sandwiches and had some fruit and fresh goat milk.

That was lunch along with some meat pies.

We stayed for a couple of hours, and the visit ended with a cup of tea and some lemon tarts.

We said our goodbyes and exchanged addresses and promised to keep in touch.

We kept driving around the island and that night found a bed-and-breakfast in one of the little towns that we came across.

After we explored the islands we kept driving south through Scotland.

We have thoroughly enjoyed visiting some of the ruined castles that are in the countryside.

We have also enjoyed driving along the coast and going through small fishing towns. They are very picturesque. We’ve also gotten out and explored some of the towns and visited some of the museums and places where the locals make pottery and stained glass.

Today we are heading down into England and very much looking forward to this portion of our trip. Wifey is a history freak and has read books about the history of the area.

So she is armed with information and we’re going to check out as much as we can and satisfy her insatiable appetite for historical crap.

The Citroen is driving flawlessly. I have managed to adjust to driving on the other side of the road and have not had any more scrapes or accidents. For this I am very grateful.

I’m in touch with our international law firm back in the US. They are handling our car accident situation with professionalism and efficiency. I don’t think I need to worry about that accident for the rest of the trip.

Broadening your horizons for FREE

I have to say that things have changed since I was younger. We now have so much access to great information.  One of the things I like to do when I have free time is to check out episodes on YouTube of Ted Talks.

Here are some samples:
From Tenacious Travel to

It’s all here. Beautifully bountiful and back breaking work bottled up in one place.

I think it is amazing. Check it out when you’ve got some time.

The best of free education is right at your finger tips. It can all be assimilated, learned and applied with a click of the mouse and a willing heart.

I’ll catch ya later, when I’ve got some more time.